Many people might be aware of Welsh Assembly Member Peter Black's Blog. The British Nationalist Lib Dem's blog has been widely publicised since its creation back in July 2003. Morfablog.com - September 2004 and BBC Wales News - January 2005, to name just a few, have mentioned Peter's blog as the first ever blog by a Welsh Politician. 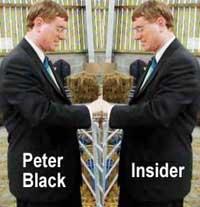 But what you may find interesting is that Peter Black actually runs 2 blogs. One under his own name, and another under the name of 'Insider': Inside Swansea Council - 'An unofficial insider's view of Swansea Council and related issues'.

This blog is the LIC (Brit Nats Liberals / Independent / Conservatives) ruling coalition's propaganda machine, and was created in response to inside out @ swansea, a blog run by the opposition Labour Party, 'An alternative commentary on how things are run - or not - by the (LIC) coalition on Swansea Council'.

"BTW, I was quite disappointed that your attack on me in today’s Evening post was based around a post on the inside Swansea council website. Couldn’t you have written something original? Or maybe the piece on that blog was in fact, your own?"

"I suggest that the blog entry was based on my letter. I make a habit of copying all my press releases and letters in to a wide circulation list of my colleagues for information."

When interrogated once again, this time by Hammers - back where we belong:

"So the Inside Swansea Council Blog is written by Lib Dem Swansea councillors. Thanks for clearing that up."

"It might be. I don't just circulate press releases and letters to other Councillors. A large number of party activists also get them."

Well what evidence have we got to back the claim that 'Insider' is in fact Peter Black AM? Peter made one fatal error when responding to a previous posting on this site. At 6.55am on the morning of Tuesday August 30, deprived of sleep, he responded to our posting using his own personal 'Peter Black' blogger account, instead of the 'Insider' account, and commented:

"Wow, that is constructive!"

He quickly realised his mistake, and deleted his comment, and a few minutes later added exactly the same comment using his 'Insider' account. But Peter didn't realise at the time that both comments were emailed to our inbox automatically. The first from his 'Peter Black' blogger account at 6.55am, AND the exact same comment three minutes later at 6.58am from his 'Insider' account. Unlucky Peter, you need to be more careful in the future!

His blog is top of the list of links from the 'Inside' site as well.

Not the best example of covering one's tracks then.

Top detective work. Think the Evening Post should be told of this dirty tricks campaign.

Actually I withdrew that comment because I decided that it was superfluous. It is certainly a coincidence that 'insider' should be thinking the same thing at roughly the same time. If I knew who he or she was then I would clearly approach him or her to find out more.

By the way I have withdrawn your comment from my site as the link does not work.

Coincidence? Come on Peter admit it. How many people are up and surfing the net before 7am?

You'd be better off admitting that you are Insider once and for all!

That is precisely what appears to have happened. As I said, if I knew who Insider is then I would ask him or her.

O come on Peter. Do you seriously expect anyone to believe that this was a coincidence?

Why not just admit it?

I have said what I need to say on this issue. I really do not see the need to keep on repeating myself. You can believe what you like.

Please refrain from using the comments section of my blog to carry on this conversation. You have your own blog on which you are free to publish what you wish. You should not need to supplement it with off topic comments on mine.

If our posts on your blog were off-topic, why not create a topic on your blog dealing with this very important issue?

Unlike your blog Peter, we will not delete your posts, we do not believe in censorship.

a bit rich hearing you complain of dirty tricks campaigning isn't it?

I think this story is blown out of all proportion.

If this non-story reaches the Evening Post then it will be even more obvious who hammers or lon152 really is.

"I think this story is blown out of all proportion."

Why exactly. It's a matter of integrity. Peter Black has always denied that he is 'Insider', but now there is proof (unless you believe the coincidence ;-) that he is Insider.

Has he therefore been lying on his blog? What else does he lie about?

This is very much a non-story, unless hammers/lon152/D**** T***** decides to create one from it to smear a political opponent.

I'm surprised you'd want to help him out. This thread only serves the purpose of giving free material to the morally reprehensible blogger(s) named above.

I don't know who 'Hammers' is. The aim of this site is to:

"expose the corruption, and failure of the three main British Nationalist Parties in Wales"

this story certainly fits the bill!

If you're interested, 'hammers' has used this email previously on the Leighton Andrews Blog:

It's obvious who hammers and lon152 is. Watch him get scared now and invent a new anonymous personality. We'll spot him a mile off as usual.

It's also worth noting that the n****** site was not updated for almost a whole week.