Brit Nat 'Welsh' Lib Dem leader Mike German, is furious at claims that Kirsty Williams AM is ready to challenge him for the leadership of the Welsh Assembly group. 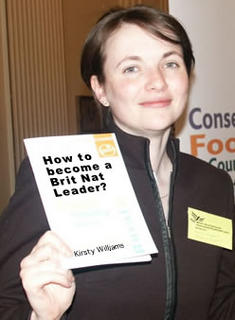 Mike mistakenly sent an email denying the claims to a public area where it could be read by others. Before Mike's pathetic mistake, most people were not aware of Kirsty's active campaign to replace Mike German as the leader of the Brit Nat Lib Dems in the Welsh Assembly.

Kirsty was obviously annoyed that error prone Mike had let the cat out of the bag:

“I am not aware that there is a leadership vacancy... I just regret that Mike made that mistake of sending it out.”

So who should be the next leader of the Brit Nat Lib Dems in the Welsh Assembly? With only six members, it shouldn't take them too long to decide!

Six AMs for now but I would imagine the Libs will nick a few of the nats at the next election, possibly becoming the third biggest group in the Assembly.

You are also rather patronising towrds Kirsty. A hint of patriarchy possibly? Personally I think it would be pretty great to have a young, powerful woman in charge of a major political group in Wales.

By the way, a little tip. You don't need to keep repeating "Brit Nat..." every paragraph. It just makes your writing look sloppy.

I would very much doubt this. As most Lib Dems seem to accept, this is as good as it gets, most believe that they actually should have done a lot better this time round as the Tories, Labour and Plaid were so weak.

I can't see any FPP seat in the Assembly that the Lib Dems will take from Plaid. The most obvious candidate would be Ceredigion, but I believe this is a safe Plaid seat in Assembly terms.

Regarding the List seats, maybe the Lib Dems will collect 1 or 2 extra max. They'll have 6-8 seats next time round.

Regarding the Brit Nat 'tip', thanks but no thanks. Until you lot are honest and accept that you ARE Brit Nats in the same way as Plaid and others are Welsh Nats, this point needs to be highlighted continuously.

I was not taking issue with your right to use the term 'Brit Nat', even if I think the very term is contradictory. I was merely making a stylistic point. Why not use the term simply in your introductions. It would make for a crisper read, without compromising your reason d'etre, something I have an interest in due to the fact that I read your site regularly.

On the Libs issue I disagree. Plaid is vulnerable regionally - South Wales West, Dai Lloyd could be in trouble. North Wales, Janet Ryder could lose and would have on the basis of the general election results. The Owen John Thomas position is precarious in South Wales Central. Ceredigion is up for grabs, although I personally think Plaid is the favourite there.

This even excludes gains the Liberals are making in urban areas the length and breadth of Wales - Bridgend, Cardiff, Swansea, Wrexham, need I go on.

Please do not get the wrong idea. I am a floating voter. I have voted Plaid, Labour and Liberal in recent elections. But I am interested in fact, policy and trends, not in pretty empty rhetoric. I am concerned that you are turning people off Plaid Cymru, which I remember as being a reasonable party under Dafydd Wigley that could unite people. It would be a sad day if that had changed.

As for the Freddie Forsyth thing. For goodness sake, grow up. I really have no time for this mediocre spy writer and wish he would butt out of public life. If you must know where I stand on his flagship issues I will tell you:
- Hunting: In favour of a ban
- The war in Iraq: Broadly in favour
- Europe: I am an enthusiast

"Please do not get the wrong idea. I am a floating voter. I have voted Plaid, Labour and Liberal in recent elections... I am concerned that you are turning people off Plaid Cymru."

I am also a floating voter, and have voted for the above parties in past elections. I am not worried about turning voters off Plaid, as it is not my party. I AM a Welsh Nationalist, but I am NOT affiliated to any political party.

What worries me is getting the Lib Dems, Conservatives and Labour TO ADMIT that they are British Nationalists, in exactly the same way as Plaid Cymru are Welsh Nationalists. Once they openly admit this, I will be a happy man and this blog will cease to exist :-)

Peter Black seems to be pretty peed off about the whole situation. Will he also be standing for Lib Dem leader in the Assembly? That'll be half of the Lib Dem members in the Assembly standing as leaders!

I do agree that I find it quite a challenge to take the Libs seriously in the Assembly with Mike in charge. Kirsty or Peter would be far more effective.
Peter is part of that new breed of Lib Dems, well versed in winning elections - especially by-elections - at all costs.
Kirsty on the other hand would be more saleable to punters.

"Peter is part of that new breed of Lib Dems, well versed in winning elections....at all costs."

Yes, probably true - "at all costs indeed". Even if that involves the Brit Lib Dems supporting anything they fancy - they have no morals just a desperation to look like they can win. They did well in the recent General Elecrion by campaigning on a lie - only party to oppose tuition fees and the War on Iraq where you Brit Libs?

Shame that many fell for it!