The following is an article written by David Banks that appeared in the Daily Post today. Recently, a series of emails sent by a Rhodri Tomos (who worked for Gwynedd Council) to Natwatch (an anti Welsh and Pro British Nationalism website), selectively published on the natwatch website, resulted in Rhodri losing his job. 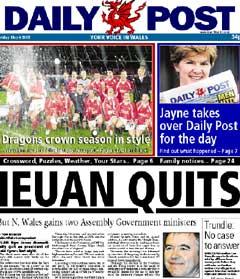 David is very critical of natwatch.co.uk in his article, and we would certainly agree with him that natwatch is a nasty and offensive website, but a large chunk of the blame must lie with the Daily Post and their sloppy journalism.

"Which leads to the question, just who is running the Natwatch site? It would seem, given their keenness to ride on its coat-tails that the Labour party are very familiar with its content."

But shouldn't the Daily Post have done this research BEFORE re-publishing the stories from natwatch?

Weekly column of David Banks
As published in the Daily Post, September 6, 2005

WHO should care what appears on an obscure little website set up to attack Welsh nationalists? Not many of us, perhaps, but now someone has lost their job because of this site’s activities. The Natwatch site published an e-mail from Rhodri Tomos, who worked at Gwynedd Council. It was perfectly obvious from its content that Mr Tomos would find himself in some difficulties if it was published...

Given your aversion to 'sloppy' journalism, might I make a couple of points.

Your claim that Rhodri resigned because of the DP coverage simply is not true.

He resigned the day before the DP covered this story - so how could the DP's publication to a wider audience have caused something that had already happened?

Secondly, would that it were that simple to find out who is behind a blog.

We all have our suspicions, but when a blog like Natwatch can be set up with just an e-mail address and no other identification, then proving who runs it is quite another matter.

You seem to have a problem with the DP even covering these stories.

As a result of the activities of Natwatch Aled Cottle found himself in difficulties and Rhodri Tomos lost his job. That, I'm afraid, is news, and as far as I'm concerned the DP would be failing in its duty if it did not report it.

Now, if you have any evidence, and I mean evidence - not suspicion, gossip, friend-of-a-friend told you - as to who runs Natwatch, I'm all ears. You appear to think it's a simple thing to do such research - well let's see you have a go.

I agree with what you're saying about the DP story being published after he'd resigned, but the information in the article wasn't all on the Natwatch website at the time, so the author of the article must have been passed on information from another source (either Natwatch or a 3rd Party). Also a minimal amount of research (assuming the author is familiar with the internet) would have been able to uncover the the fact that the charges of racism aimed at Aled Cottle had been dropped by the police and also the business with Nic Dafis.
Both of these points would be very relevant to the article in my opinion.

The e-mails that led to Rhodri's resignation had all been published on the Natwatch site at the time of the DP story.

It is Natwatch, not the DP, which caused his resignation. By the time the DP hit the newsstands, Rhodri had already resigned.

Of course Mr Tomos resigned before the article in the Daily Post was published. He resigned when Daily Post journalists contacted his workplace whilst researching the story.

Well, when no-one knows who runs Natwatch, the DP makes a convenient target doesn't it.

Hypocrisy? That'll be why I got an e-mail of thanks from Rhodri this morning then wouldn't it?

Your 'comment' in the DP was very good in my view, and the 'sloppy journalism' jibe was not aimed at you, but rather at the journalist who wrote the original story.

I believe you are correct to note that parts of the email conversations between Natwatch and Rhodri were published on Natwatch before the DP's story, but as has already been stated, Rhodri resigned when Daily Post journalists contacted his workplace whilst researching the story.

Now the 'sloppy journalism' charge comes in to effect as only one part of the story was published in the DP. A simple Google search, would have found natwatchwatch.blogspot.org with further email conversations between Natwatch and Rhodri, where natwatch threatens Rhodri.

I think that journalists are very influential. They can change the flow of the guiltiness or other aspect of the news.