Another superb 'Opinion' column by Martin Shipton in the Western Mail yesterday. 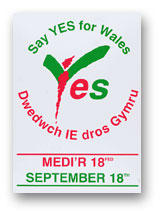 He argues that the Welsh people have already voted in principle for devolution in Wales, and that it is a ludicrous idea to ask the electorate at large to decide whether the Welsh Assembly should acquire primary law-making powers or carry on with the current powers to make secondary legislation, as it is such a complex matter.

He also argues that Lord Kinnock and his anti-devolution and anti-Welsh British Nationalist Labour colleagues, would use any referendum to exploit misplaced fears.

When it's wrong to ask voters to decide: Sep 3 2005, Martin Shipton, Western Mail

Enjoy the read, it's well worth it!