Is the nation-state a good Idea?

So the Brit Left are now saying that the nation-state is a good idea. In a recent article in the Guardian, Martin Jacques formerly of Marxism Today and communist pin-up boy, speaks in favour of the nation-state. 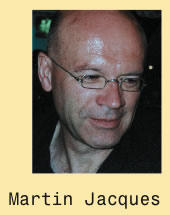 Of course, Welsh nationalists could have told him that decades ago. But when we called for independence we were accused of dividing the British working class. Now that China and India are challenging the USA, and multinational corporations, the nation-state is redeemed and supported by the British Left.

Lets hope that the rest of the British Left will follow suit and that Martin Jacques will follow the logic of his argument to include Wales. I don't know Jacques views, but it could be difficult for others on the Brit Left, because supporting a Welsh nation state would question and undermine their own nation state, i.e. Britain.

It would be interesting to see if Jacques is on the side of Welsh, British or English nationalism? One hopes as well that Tibet isn't included in Jaques' definition of the Chinese nation state.

Martin Jacques left wing? Which decade are you in exactly?