A paper published today by two Cardiff University academics - Professor Phil Cooke and Nick Clifton - under the title 'Welsh Assembly and Economic Governance in Wales', slams Rhodri Morgan and the Brit Nat Welsh Labour Party for their unconditional allegiance to their masters in London, and their shameful handling of Welsh affairs. 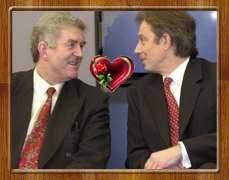 The book takes a swipe at Rhodri Morgan, stating,


"Nowadays it is believed that Tony Blair only has to show possible indications of a sneeze for him (Mr Morgan) to be at his side with the Lemsip."

"This contrasts with Scotland where in a classic case the DTI wanted a clear run to manage a Falkirk bus company closure threatened by the bankruptcy of its US parent as a 'global' issue only to be rebuffed by the Executive stressing that, if anything, it was a 'local' issue, and Scottish Enterprise finding a Scottish consortium willing to invest and save the company through a management buyout."

"Incidents such as this underline the importance to territorial identity of strong devolution settlements."

As Welsh Nationalists, we have always known that the Brit Nat Labourites will put their party before the people of Wales. We have seen this time and time again, and Professor Phil Cooke and Nick Clifton's paper only goes to confirm, this view.