EXCLUSIVE: Care Allowances for Councillors are paid out to allow councillors to pay for Childcare (or any other dependant relative) while they carry out their duties on the Council. The Welsh Assembly Government's advice is that these claims should be user friendly and do not require documentary proof of actually paying anyone, - i.e. no receipts. 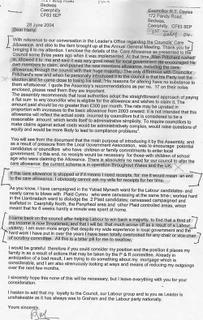 After Labour took control of Caerphilly CBC in 2004, the Plaid Cymru group questioned this, as there was no apparent correlation between the claims made by Labour Councillors (generally maximum allowed) and their actual attendance at meetings.

This prompted a letter, from Labour Councillor Ray Davies to Harry Andrews - the leader of the Labour Group. Ray Davies is a Councillor for Bedwas Trethomas and Machen. He was deselected prior to the last election, but was reselected following an article in the Western Mail. We have obtained a copy of this letter, and it makes remarkable reading. Ray wrote:

"If it means I need receipts, for me it would mean an end to the care allowance. I obviously cannot ask my wife for receipts for her time"

So Labour Councillor Ray Davies was claiming money to pay his wife to look after their own children! He then complains about not being given any Chairs or Vice Chairs to augment his income:

"I came back on the council after helping Labour to win back a majority, to find that a third of my income is now threatened, and that I will be that much worse off as a result of a Labour victory. I am even more angry that despite my wide experience in local government and the hard work I have put in over the years I have been totally overlooked for any chair or vice-chair of scrutiny committee. All this is a bitter pill for me to swallow."

The Letter is signed by Councillor Ray Davies, but also makes the Leader of the Council an accessory as he did not disclose this information. Councillor Ray Davies and Councillor Harry Andrews should be brought before the Caerphilly Council Standards Committee. We call on the Welsh Assembly Government to tighten their 'Care allowance' guidelines, so that this misuse of public money by Labour Councillors can not happen in the future.