We understand that the people of the Rhondda (and Wales) may have more important things to worry about, but following from yesterday's story, here's some information collected about one of the biggest anti Welsh Brit Nats of them all, Rhondda turncoat AM - Leighton Andrews. 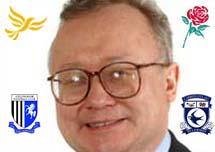 After many years in the wilderness, Leighton eventually resurfaced in the Brit Nat Labour Party, winning Rhondda back from Plaid Cymru in 2003. Michael Meadowcroft, a former Liberal MP, described him as moving "from Liberal thinker to cheerleader for Blair's authoritarians".

Most people didn't know of Leighton's 'Welsh heritage' in his Gillingham days. He used to write columns in Liberal News full of praise for his beloved Gillingham Town. He now claims to be an avid Cardiff City fan.

So what do we make of Brit Nat Leighton? Liberal to Labourite. Thinker to cheerleader. Gillingham town to Cardiff City. The word turncoat comes to mind.

Turncoat: a disloyal person who betrays or deserts his cause or religion or political party or friend etc.

Don't worry, I doubt the good folk of Rhondda will be stuck with him for long, in the best traditions of British politics, he is probably just marking time in Welsh politics, before his unswerving support for the New Labour project and all it's excesses secures him a safe seat in England...

And he thinks we are scum?

I am so glad you enjoyed this posting on my blog, but wouldn't it have been polite to acknowledge your sources?

Yes, fair comment, I apologise for that. I looked at info from many different sites, but your site seemed to make the exact same points as I was trying to make. I will rectify this now with a credit.

I shall follow your blog for more news of Mr Andrews.