Plaid Cymru have slammed a call by Brit Nat Conservative Liam Fox for all British schools to fly the union jack. Fox said he wanted the flag so that schools could show a common identity. 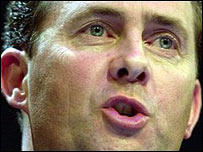 Fox, discussing his vision for the future of 'Britain', said he would ensure that there was a union jack outside all schools. He told London's Evening Standard of his desire that schools across Britain to fly the union jack:

"I'm suggesting that all schools fly the British flag outside to emphasise to people that wherever they have come from, whatever their background, they share a common identity,"

"The Welsh flag isn't represented on the union jack... if Liam Fox thinks he can become prime minister on the back of waving a union jack in Wales he's got another thing coming. He'll end up flying the flag so much he'll suffocate and the only flag the Conservatives will be flying at the next election is a white flag!"

Rather oddly, the British Nationalist Labour also dismissed the idea, saying that:

"introducing nationalism into our classrooms is a bad idea."

This is rather strange considering the way many prominent Labour Party members, such as Neil Kinnock, have been vigorously promoting British Nationalism over the last few weeks!