So Peter Hain thinks it's time for his 'Government of Wales Bill' critics to 'grow up'. He asks Plaid and the Lib Dems to support his 'radical piece of legislation' to head off any Tory attempts to water it down. Water it down? 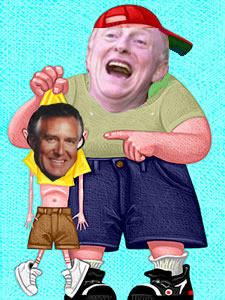 A bill that's been drawn up to hide the divisions within the British nationalist Labour Party, instead of looking at what's best for the people of Wales.

A bill that includes pre-legislative scrutiny at Westminster, to ensure that the real powers remains at Westminster and Labour HQ.

Why should Welsh nationalist, and moderate British Nationalists like the Lib Dems support such a bill? In Plaid MP, Elfyn Llwyd's words:

"...we are not going to accept a quarter loaf when we could have the whole lot."

Peter Hain has no principles. He supports a law making Assembly, but is too scared to take on the Kinnock's of his party. Hain, it's about time you grew up, and took on the Labour bullies - for the sake of Wales.

Labour brought devolution to Wales not because they believed Wales was a nation but because they wanted to cut off parts of the UK and hog the power for themselves without having to win an election nationally.

Labour were frustrated in the 1980s where the 1987 general election exposed them as a regional party whilst the Conservatives were clearly the party with support from all over the UK. They couldn't handle being strong in some areas yet out of power nationally. The solution? Devolution.

What utter crap from Labour again. 'Tory plans to water it down'? There are several members of the Tory Party more supportive of devolution than many Labour Party members! Compare the attitude of someone like Glyn Davies with that of Huw Lewis, Irene James, Lynne Neagle and any of those spineless bastards.