Three sisters were amongst the six members of Cymdeithas yr Iaith Gymraeg arrested last Thursday after painting slogans calling for a new Welsh Language Act on the walls of the Welsh Assembly Governments’ headquarters in Cathays Park, Cardiff. 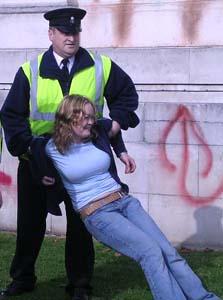 Four slogans were painted, including ‘Deddf Iaith – Dyma’r Cyfle’ (Language Act – the last chance) on the walls of the building following a press conference in which the names of hundreds of prominent Welsh people who have stated their public support for a new Welsh Language Act.

According to Cymdeithas yr Iaith, this marks the beginning of a series of direct actions which will take place in the coming weeks leading up to Christmas. This action marks a significant progression in the campaign for a new Welsh Language Act.

Catrin Dafydd, chair of the campaign for a new Welsh Language Act, said:

"This is the time to press for a new Welsh Language Act. The recent decision by the Welsh Assembly’s Government to abolish the Welsh Language Board means that some sort of Act will be created. The Welsh Assembly government aims to carry out an administrative tidying up exercise and nothing more. This is not good enough – a comprehensive Language Act which establishes basic rights for Welsh speakers is essential." 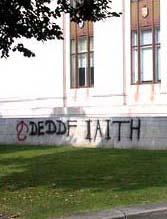 "Following Rhodri Morgan’s complete objection, Cymdeithas yr Iaith will be taking direct action over the coming weeks to ensure that this important matter is discussed."

"We call upon the people of Wales to support this campaign by attending the National Rally to be held in Cardiff on the 1st of October. We also call upon the opposition parties in the Welsh Assembly to raise the issue as a matter of urgency."

“During this year’s National Eisteddfod, Rhodri Morgan claimed that only a handful o bullies supported the call for a New Welsh Language Act. The fact that so many prominent Welsh people have stated their support publicly shows that this is not true. There is now a general consensus that securing new legislation for the Welsh language is essential to ensure that the rights of Welsh speakers are protected over the coming decades.”

The 'New Welsh Language Act' National Rally will be held at 2pm, on Saturday the 1st of October at the National Assembly Governments’ headquarters in Cathays Park, Cardiff. The speakers are Hywel Williams MP, Hywel Teifi Edwards, Mererid Hopwood, and Steffan Cravos.

Ahh, the 'bullies' at it again I see.

Isn't the Labour party's attitude towards the Welsh language a disgrace?

The real 'bullies' are Welsh Labour, not Cymdeithas yr Iaith. Carl Sargeant AM is one of them- he was quick to condemn the lad who wrote "f***ing Brits" but unsurprisingly he's too much of a coward to express the same disgust at his party leader when he says "f***ing Welsh".

Then how about the way that vile natwatch site- which is quite obviously a story machine for the Welsh Labour party- bullied a council worker causing his resignation.

Bullying is central to New Labour.

The Cymdeithas girls responded bravely to Rhodri Morgan's "I don't care" attitude to the Welsh language.

It's clear that the Welsh language is not safe in the hands of the real anti-Welsh: New Labour.