Is this what the British Nationalists call freedom of speech? 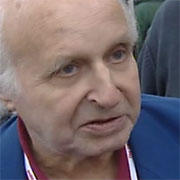 This was after poor old Walter was violently bundled out of the hall by New Labour bullies.

British Nationalists like Tony Blair and Jack Straw talk about protecting freedom of speech, and then treat their own party members, who dare to disagree with their policies, in this vile way! As stated on Labour Watch:

"It might be worth noting.... this is the way fascism started." 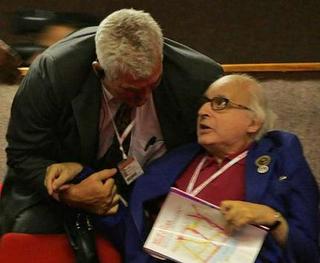 The Labour Party is to apologise to an 82-year-old member who was thrown out of its annual conference for heckling. Walter Wolfgang, from London, was ejected from the hall after shouting "nonsense" as Foreign Secretary Jack Straw defended Iraq policy. Police later used powers under the Terrorism Act to prevent Mr Wolfgang's re-entry, but he was not arrested.

For those who want a vision of the future under New Labour, if Tony gets his way on legal reform, ID cards, and zero tolerance of anti-social behaviour, look no further than today's disgraceful incident at conference when an 82 year old heckler, Walter Wolfgang, was bundled out of the hall by security guards. A second delegate who tried to protests at the way he was treated was also expelled. In the New Labour utopia, dissent will not be tolerated and there will be no freedom of speech. It might be worth noting.... this is the way fascism started.

I heard the Home Secretary, Charles Clarke, this week, assuring us that the new anti-terrorism legislation would only be used against a tiny minority of people who were against the State. Now we see how that legislation can be used to protect the State from people who embarrass it. Good job the heckler was 82, and shamed the Labour Party into an apology! In the same interview Mr Clarke spouted forth about Mr Blair’s respect agenda. He said the government couldn’t force people to behave in a particular way, but “You should have to respect other people”. The irony is crushing.

So yes, I find it outrageous, yes I find my blood boiling, yes I want to spit expletives and post excrement to Number 10 when I see an 82 year old man, a faithful party member, being yanked, tugged, pulled, pushed, grabbed, threatened, man-handled out of a Labour party conference speech. For what? For shouting 'nonsense' when Jack Straw spouted his guff, broke wind up his vocal cords, and flabbed his usual bollocks about why people are continuing to die. This freedom of speech doesn't even extend to the ranks of his own party. The man was thrown out, his security pass invalidated, and then held under the prevention of terrorism act when he tried to re-gain entry.

Their attack on free speech is not just confined to throwing people out of their conference. Their party employs people who deliberately take people's quotes out of context in an active attempt to smear them.

This means everyone has to be far more careful about what they say and type on the internet especially. Even non-politicians.

Labour should never be elected because they will always raise taxes and increase government's power over the people.

Did you know David Taylor (the webmaster of Natwatch) was the Labour party official at the conference who instructed bouncers to drag Mr. Wolfgang out of the hall.

Labour disgust me. I can't even begin to articulate my anger over this.

Who the hell voted for these fascists?

Not me, I voted Plaid. I've seen your blog, are there any English Nationalists parties standing for parliament?

The sooner Labour are out the better. They'll take away all our freedoms and impose government on us more and more.