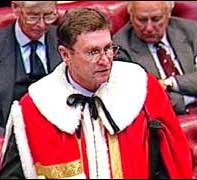 Two of the constituency parties that benefited from the donations succeeded in electing Brit Nat Tory MPs - Stephen Crabb in Preseli Pembrokeshire and David Jones in Clwyd West both won their seats narrowly from Brit Nat Labour, which hung on in Cardiff North and the Vale of Glamorgan.

Now, you may think that there's nothing wrong with this. Even though he came from outside Wales, and directly helped to elect his Brit Nat colleagues here, the Conservative Party, like the Labour Party, Lib Dems and Plaid, depend on political donations for their survival. Have a read through Aschroft's past record, and then make up your mind!

Mr Ashcroft received a round of applause at the Tories' spring forum on Saturday, despite the row about his peerage because of the controversies surrounding him and his bankrolling of the Tory party.
BBC NEWS, Saturday, 1 April, 2000

Leaked Foreign Office memos also revealed that UK diplomats alleged Lord Ashcroft had threatened to "stir up trouble" for Britain abroad if he was not allowed to open a bank in the nearby Turks & Caicos Islands.
BBC NEWS, Thursday, 18 January, 2001

Billionaire Tory peer Lord Ashcroft claimed yesterday to have won a bitter battle with Clare Short, the international development secretary, and the Belize government to protect his lucrative tax exemptions in the small Central American country. His victory comes at the expense of an impoverished country which will lose millions of pounds of debt relief.
Guardian, Friday December 21, 2001

Lord Ashcroft, who left London for the US and Belize 20 years ago, has been in the headlines again this month as American investigators study his links to Tyco, the Bermuda-based group whose chief executive, Dennis Kozlowski, has been indicted on tax evasion charges.
Guardian, Tuesday August 27, 2002

A High Court judge has accused former Conservative Party treasurer Lord Ashcroft of 'blackmail' and mounted a savage attack on the tycoon's 'unacceptable' business practices, which he describes as bringing 'the City into disrepute'.
Observer, Sunday May 4, 2003