Oh dear, one of the Assembly's biggest British Nationalists, Huw Lewis AM for Merthyr, has managed to write a letter in joined up writing to the Western Mail. 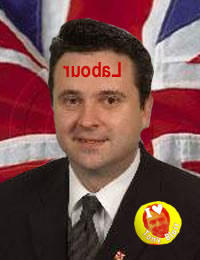 He warns the public that Plaid Cymru is ready to form a 'right wing' axis (yes, you know, like that Hitler-Mussolini Axis in the 1940's - nice touch Huw). But Huw, we already have a right wing axis in the Assembly, it's called the Labour Party and you'r part of it!

Want a house but can't afford it? Thanks Labour.
No council houses left? Thanks Huw.
Privatised health service? Cheers Labour.
Top up fees for students? Yes, vote Labour, like Huw does.

All this and more thanks to the British Nationalists like Huw Lewis and his chums in Labour. But, just to keep the voters happy, they'll throw in some bribes like free school meals and bus passes; pity they were too incompetent to do some basic sums before the election. But who cares? Wales and the Assembly isn't to be taken seriously is it?

Welcome to the wonderful world of Welsh Labour where left wing jingoism of the Huw Lewis' of this world contrasts with right wing policies and awful populist gimmicks.

Labour won't be happy until there aren't any Welsh-speaking communities left. Of course they don't do anything against those communities, no need see, because British capitalism and British market forces will sort it out for tham. Clever eh? Hey, but this is the best bit.

"Plaid Cymru was established as an anti-socialist party. It will always put divorce from the UK before social justice."

You and your Labour butties weren't much use during the Miner's Strike. In fact, despite all the class jingoism, you prefered to have Margaret Thatcher rule Wales than have a self-governing Wales which would have been left wing. Welsh Labour prefered to have a small bit-part as part of the UK rather than see Wales have self-government which could have decide the fate of its coal mines.

BNW doesn't have a view on any proposed cooperation between the three present opposition parties in the Assembly. But three things come to mind:

1. This 'right wing axis' defeated a useless Labour government which wanted to introduce top-up fees.
2. Huw, the Valleys are still poor. You've made a dog's dinner of Objective One. The Valleys are poor because Labour are in power. You ARE the problem Huw Lewis. Welsh Labourism is the cause of this poverty.
3. What kind of Welshman can be a member of a party whose leader and Prime Minister says 'fucking Welsh'. Oh, I know, a British Nationalist Welshman like Huw Lewis.

Huw, Labour centrally are laughing at you boy. Don't you get it? They patronise you with the usual, "bla bla rugby, bla, bla good old Nye Bevan, bla bla Keir Hardie" and then ignore you. Labour Centrally regard Welsh Labour as the most useless, stupid and uninteresting part of the whole Labour Party. You're just there to make up the numbers. Get over it.

I don't understand why you're so hostile to a Tory/Plaid coalition.

It would be far better than Labour. Wales would get a proper centre right governance plus respect for Welsh language, identity and culture.

As stated in the piece, BNW doesn't have a view on any proposed cooperation between the three present opposition parties in the Assembly.

The Brit Nats, right, left and centre are just as bad as each other. They will never put the people of Wales first.

But we certainly DO oppose a right wing governance in Wales. 18 years of this let Wales down badly!

This doesn't mean that it would be impossible for Plaid, Independents and Lib Dems to work with the Tories to govern Wales, but it must only happen on the correct terms, and in my view those terms should be firmly to the left.

In my opinion many Plaid supporters, especially those from rural areas, would be happy with a Plaid and Tory coalition. Think of issues such as fuel tax, keeping small primary schools open, adequate funding for Welsh language and culture, choice in education, less red tape for small businesses, support for farming etc. I tend to think Plaid have gone in the wrong direction by pretending to be socialists/old labour in the valleys to attract votes.

Leave crackpot loony left ideas to the Lib Dems, and leave the big brother state to the New Labour control freaks. Plaid and the Tories are the future in Wales and the sooner they converge to offer Wales the quality government it deserves, the better!

Remember: the more Plaid keep the Tories at arm's length, the longer Labour are going to rule Wales.

There are obviously things that Welsh Nationalists can agree on with the Tories, but I DO NOT want Plaid to become a right of centre party.

The majority of Wales is strongly socialist, and our only nationalist party should represent this.

On the other hand, I'd be more than happy to sse TRULY Welsh right wing, an TRULY welsh left wing Parties standing for seats in Wales against the British Nationalists.

I'd agree with you that it would be desirable for there to be two Plaid cymru parties in Wales- one on the left and the other on the right. Because that's unrealistic to happen in the short term I think Plaid should be in the centre. This would require a shift to the right.

I'm not sure of your claim that most of the Welsh are socialist- I tend to think that's an outdated idea. I think this it the mistake Plaid Cymru have made in the last few years. If you don't believe me- look at their poor election performances after claiming to be socialists.

After all, the majority of the Welsh have voted for New Labour and the Tories who have been described as right wing parties by Plaid. The Welsh have not moved their votes from New Labour to the new socialist parties that have emerged.