Brit Nat Labour Welsh Assembly Minister, Andrew Davies, has been accused of making a serious error of judgment by accepting free tickets to watch Real Madrid at the invitation of EHN, the European market leader in wind power schemes. 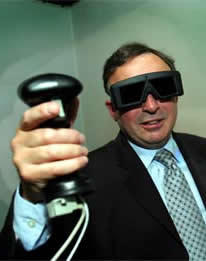 Most members of a delegation from Wales accompanying Mr Davies also went to the match, including his press officer and a number of councillors. A statement from Mr Davies praising EHN appears on both his own website and EHN's website. The company is in the process of making a number of planning applications in Wales. Plaid MP, Adam Price, said:

"It is clearly unfair to indigenous companies that the Minister has developed such a close relationship with a competitor, particularly at a time when a couple of Welsh businesses in this sector - one in Bangor, the other in Cardiff - have recently gone to the wall.

"This is especially damaging given the highly contested nature of wind energy at the moment. It's also indicative of the entire approach of the Labour Government to renewable development, which has been an inward investment model based on large corporate firms and large-scale projects, rather than the more sustainable community-based model pioneered in Denmark."