He must be having a laugh! The biggest British nationalist in Wales is at it again (does he still live in Wales? - ed).

Old, Neil, erm, sorry, Baron Kinnock of Bedwellty, is once again upon his white steed, flying the flag for British nationalism, beating his manly chest, proclaiming that he will campaign again for a 'no' vote if there was a referendum on more powers to our poxy (Brit Nat Labour run) Assembly.

By all accounts a likeable chap, his Music Hall Welshness is just about innoffensive enough to be patronised by the British establishment which he always so longed to join.

Forget the radical socialism rhetoric of his youth, like all other 'international socialists', it was all probably done to cover this British nationalism and attack any Welshness which stretched beyond the kitch.

The old boyo is now head of the British Council where many feel that he is full-enough of himself not to realise that the English have never stopped laughing at him. This great British Nationalist will do anything to stop Wales becoming a great little European nation-state.

The man who proposed in the 1980s that if Wales wanted an Assembly it should be divided into two regions (one for the north and one for the south), now complains that Britain could be divided. Good enough to divide Wales obviously.

This is the man who despite all his big talk against Thatcher and the Tories, killed off the 1979 Referendum which could have stood up to the exesses of Margaret Thatcher's policies. How much of a British Nationalist do you have to be to do that?

But then you see, when push comes to shove the Kinnock's Brit Nat Welsh Labour will always back British capitalism against Welsh communities. After all they're British nationalists first and last. 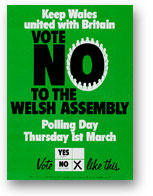 changed his mind on everything he's ever stood for. His only consistent policy has been to be a British Nationalist. Does he and his wife, Glenys, still believe that we care about them?

Glenys Kinnock - the woman who thought Welsh not good enough a language to speak to her own children but is willing enough to push herself on to Welsh language tv to speak in the language 'she nearly forgot'.

Don't you get it Neilo? British is just English with a funny accent - but then, that's Neil Kinnock for you.