There was a very interesting article in the Western Mail today, regarding a spat that's broken out within the 'Welsh' Conservatives. The row surrounds who should succeed David Davies AM/MP as the next Tory candidate in Monmouthshire at the next Assembly elections in 2007. 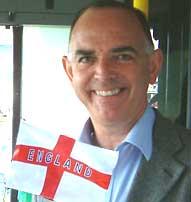 The Western Mail claims that British Nationalist Conservatives in Wales leader, Nick Bourne AM, wants the Tories to become more 'Welsh' and push for greater powers for the Welsh Assembly. He favours devolution sympathiser Nick Ramsay as the Conservative candidate.

On the other hand, David Davies AM/MP, who currently holds the seat, wants to abolish the Welsh Assembly and favours devolution sceptic - South Wales East AM - Laura Anne Jones as their candidate.

This story shows, yet again, how confused the Conservatives are in Wales. After years of dissappointment, some Tories like Nick Bourne and David Melding, have finally realised that the only way to get more votes in Wales is by becoming more Welsh, and less British. But unfortunately, the vast majority of their colleagues would still prefer to see the Welsh Assembly abolished.

The Conservatives aren't the only Party confused on this issue. The British Nationalist Labour Party have recently drawn up the 'Government of Wales Bill' as an attempt to hide the divisions that exist within their Party. Some high profile members such as Carwyn Jones AM are strong supporters of devolution, while others, like Neil Kinnock, have stated that they would campaign against further devolution for Wales.

If the Tories and Labour cannot even keep their own house in order, and reach an agreement within their own party on such an important issue, what chance have they got in leading Wales out of poverty?