Brit nat Labour MP and Government minister, Douglas Alexander, is the latest Labour MP to push British Nationalism on us. 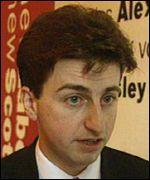 His recent comments that the European Union shouldn't be allowed to submerge national (erm, British I assume, not Welsh, Scottish nor English) identity is just the latest in a long line of British nationalist 'nation building' rhetoric from the Labour smugocracy.

There is a very strong argument (political, economic, moral and of identity) against the further deepening of the EU, but I can hardly see how the European idea is a threat to my Welsh identity.

It's certainly less of a threat than the British nationalist nonsense being forced on us by New Labour. British negates Welsh identity with its 'national' British team in the Olympics (therefore no Welsh team), a British seat in the EU means there's no Welsh seat and the 'British' language aka English, is a massive threat to Welsh.

All these fears of course are narrow-minded racist rhetoric to Labour. It's odd, therefore, that Labour British nationalists now use similar terms to promote their British nationalism - what's wrong, now that they don't believe in socialism, are they looking for another philosophy?

It's also odd to see the Scottish MPs, Alexander, Brown et al, who are turning out to be the biggest British Nationalists. What's wrong, afraid that if the UK goes down the pan, their careers will follow?

I always thought the Scots were an intelligent nation. If they were independent, they'd enjoy the same standard of living and services as Norway. But, no, British nationalist MPs like Alexander and Brown would rather enjoy the limelight of Westminster; Scotland it seems is too small for their 'talent'.

So, they use Scottish nationalist arguments they've heard back home, replace Scottish with British and hey presto, it's all sold as good, clean, inclusive British nation building. Alexander, don't patronise us!

You're as pointlessly snide as ever but you have a point.

Opposition to a "European identity" is the sort of xenophobia that all Nationalists (seperatist or unionist) are prone to.

Europe, despite the democratic deficit, does not threaten my sense of Britishness, any more than my Britishness threatens my Cymreictod.

If plaid could sort out exactly what sort of Pan-British-isles co-operation they wish to see after "independence", then some of us might actually start taking them seriously. - personally I think their too far up their own ideological backsides. (bit like the blairites and Trots really)