Like most Welshmen, we here at Britnatwatch are overjoyed after a wonderful Welsh football win over Northern Ireland today, but we read with interest the dilemma that faced Labour British Nationalist Neath MP Peter Hain, and Delyn MP David Hanson. 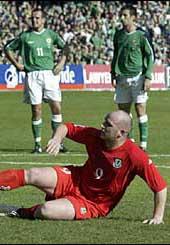 This just shows once again what a complete constitutional mess we have on these Isles. Wales, England, Scotland and Northern Ireland should have their own full Independent Parliaments.

Maybe then we would see a Northern Irish 'Northern Ireland sports minister'? It would make sense wouldn't it!