In today's Western Mail, British Nationalist Tory Shadow Secretary of State for Wales - Bill Wiggin - blames Labour for Wales' problems, and insists that the Conservative Party is ready to take on Labour, and be the major opposition in Wales after the 2007 Assembly elections. He says: 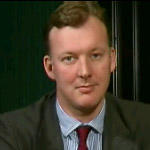 "Devolution was supposed to help Wales, but it's not the way Labour are doing it. Welsh patients wait 11 days longer than patients from England for treatment; twice as many hospital consultant vacancies; 64 schools closed... It's not the effing Welsh that's the problem, Tony, it's the effing Labour Party."

We agree with him that the Labour Party have made a mess of running Wales since '97 both in Westminster and later the Welsh Assembly; but what about the 18 years prior to that? Who was in charge then Bill?

And what's Bill's answer to the 'Wales Problem'? Abolishing the Welsh Assembly!

The British Parties have let Wales down badly over the years, and as a consequence, we are now one of the poorest regions in the EU! We need a strong Welsh Parliament. Only then will we be equipped to deal with the problems that face Wales today.