It's time to listen, Mr Pugh 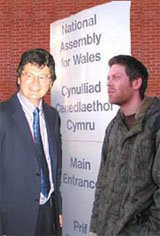 Alun Pugh opposes any calls for legislation, to ensure that Welsh speakers can use their own language in Wales. He constantly refers to private sector companies such as Ikea and Tesco, who do offer a limited Welsh language service, but doesn't refer at all to the 95% of companies in Wales who do not offer any services through the medium of Welsh.

His essay shows clearly that Alun Pugh, and his party, are only interested in protecting the 80% who do not speak Welsh, and don't give a toss about the minority who do.

Our language will die with people like Alun Pugh and Rhodri Morgan in charge, and it will be too late to complain when it's gone!

"WE SHALL be abstaining tonight because we hope to have the opportunity before long to do the job properly. That will be done when we revisit the question of a Welsh language measure when we are in Government."

So said Rhodri Morgan MP on the eve of the Westminster vote on the Welsh Language Act 1993. Some 12 years on, the Assembly Government intends to scrap the Welsh Language Board giving Mr Morgan, now First Minister, a real opportunity to honour his words.

Support is now gathering for new and radical legislation on the Welsh language. Alongside the rallies and direct action, John Elfed Jones, former chair of the very first Welsh Language Board, has stated that the time has come for a new Welsh Language Act.

Press here to read the full article on icwales.co.uk

The bit I enjoyed most in Cravos' piece was this:

Alun Pugh suggests that a new Welsh Language Act would "alienate the 80% of people in this country who have not been fortunate enough to learn both our national languages". There is no evidence to support this view and it is surely scandalous for Alun Pugh to be so divisive.

This assumption that non-Welsh speakers are automatically going to resent any legislation that protects the civil rights of Welsh speakers is not only not supported by the evidence, it is contradicted by the evidence, in my experience. Whenever Cymry di-Gymraeg are given the facts (rather than the myths) about language preservation, they are over-whelmingly supportive.

Of course, you wouldn't know that from reading the Western Mail, who are always ready to print rants by the mouth-foamingly anti-Welsh minority in the interests of "balance". How many letters have they printed complaining about how the cost of disabled access is being "forced upon" those of us who don't need a ramp to get into the Post Office?

No one denies that there is good will towards to the language, what the activists are saying is that good will isn't enough, and that relying on good will as a matter of policy, as Welsh Labour is content to do, is simply irresponsible. If good will was enough, we wouldn't need Disability Access legislation, or Equal Opportunity legislation, or, if it comes to that, any legislation which effects businesses at all.

Perhaps Alun Pugh could give some examples of countries which have affected language shift reversal without legislation? I can't think of any.