How usless is our National Assembly?

Out of 10, how useless is the Labour governed National Assembly? What ever the score, it must be pretty useless. It's led by a government which can't govern because of it's arrogance to go into coalition, and because it doesn't have a coherent policy for the country except for Blairism with gimmicks and bribes. 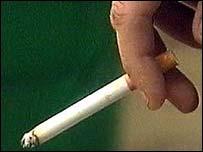 The very uslessness of the Assembly under Labour (it is Labour's Assembly don't forget!) is lit up in neon with this week's debate about banning smoking in public places. The Assembly voted to make Wales smoking-free two years ago.

The Westminster government (which is increasingly becoming the English Parliament - which we support) is now about to debate smoking in public places. No doubt, Wales will get the fag-end of the debate when they've finished.

Better wait until the grown-ups in London debate this before we take a decision, we don't want to rock the boat do we? After all, we are part of England&wales!

But, honest to God. How useless and anti-Welsh are Labour? What's the point of this Assembly? If any issue could be sorted out in Cardiff (even by Welsh Labour), then banning smoking in public places it is.

But, no, for the Labour Brit Nats in Wales, it seems that it's better to have lung cancer than self-government.