In September, Plaid Shadow Culture Minister Owen John Thomas called on Brit Nat Culture Minister Alun Pugh to commission a survey to assess the demand for Wales to field its own team at the 2012 Olympics in London. He said:

"In a recent survey carried out in Scotland (by C-scOT), 78% of those questioned were in favour of a Scottish team competing in London's 2012 Olympic Games. Cleary they recognised that a national team would provide greater opportunities for Scottish athletes to experience the thrill and competitiveness of these ancient Games".

Since then C-scOT (The Campaign for a Scottish Olympic Team) have launched a website which states:

"C-ScoT has been set up by ordinary Scottish sports fans to ensure that the Olympic philosophy, can be harnessed; to bring maximum and enduring benefit to Scottish sport, Scotland’s people, its culture and its health; using the forthcoming focus on London’s hosting of the games as a catalyst."

The Campaign for an English Olympic Team was also launched last month, asking:

"why there is a British Olympic team when the people of the British Isles consider themselves to be English, Scottish or Welsh and not British."

SNP culture spokesman Michael Matheson recently hit the nail on its head when he said: 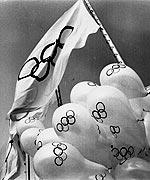 "Although most National Olympic Committees (NOCs) are from nations, the IOC also recognises independent territories, commonwealths, protectorates and geographical areas."

It's about time a campaign was lauched in Wales. If you can help to set-up 'The Campaign for a Welsh Olympic Team', please contact us.

Not sure I agree with this - of course as a Welshman I would love to see it, but if do get it, then what about the states of the US ? The states of India, Pakistan etc etc ?

May I suggest a link related to the Beijing 2008 Olympic Games?

Please let me know if you want a link back.
Many thanks for your reply.