Cardiff New Labour Councillor Michael Michael (in a past life known as Michael Costas, but 'Costalot' locally) has landed himself in hot water with local residents for planning to build a 3 storey block of flats on land in his Ward in Fairwater rented from the Council! 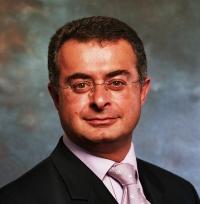 The dastardly councillor who is hairdresser by appointment to the First Minister (who in their right mind would admit responsibility for Rhodri’s follicle explosion?), has been bleating for an apology from Plaid Cymru’s Neil McEvoy for exposing his extra curricular financial dealings.

It is alleged that our Labour friend, on obtaining a lease from the Council, promptly sub-let to a company half belonging to his wife. After his wife’s company was paid off £10,000 for the sub-let, he subsequently received £300 per month from Crown West Cars in rent. Not a penny of this has been declared in the members list of interests on Cardiff County Council! (now there’s a surprise!)

Crown West now face eviction after only 2 years as the crafty councillor seeks to build flats, which will have a detrimental effect on the privacy and quality of life of locals. Over 50 constituents demonstrated at a site meeting, but to no avail. The Planning Committee, with New Labour’s Councillor Gill Bird in the Chair, gave its approval.

Brit-Nat Watch looks forward to uncovering more in the near future. Watch this space!

Any updates on this?