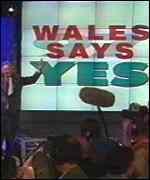 
"What we have here is a triple prejudice against the Welsh. No other part of the UK would be treated with this indignity."

"The rules of the Assembly are being gerrymandered to require a two-thirds majority, thus giving a perpetual veto to New Labour."

"This is an improbable scenario, deliberately designed to ensure that every possible hurdle is put in the way of progress for the Welsh people."

We couldn't agree more. The British Nationalist Labour party is treating Wales and the Welsh people with utter contempt. We must fight back!