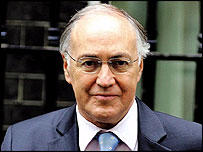 Tory leader, Michael Howard (wasn't he from Llanelli in a former life?) is desperate that the British Labour Party doesn't do all the running as they define the New British nationalism.

Funny how a few years ago Welsh nationalists were hounded by Labour and Tory British nationalists for saying what is now accepted wisdom. But then English is a proper language, unlike Welsh!

To insist that every one become British is socially inclusive and patriotic. If you change the word British to Welsh and use the same argument in Wales, it makes you a xenophobe or anti-English.

Just get used to the new British nationalism from our friends in Labour and panting behind them, the Conservatives.

Here's the latest, Michael Howard on today's BBC News Website. Oh, and a joint of roast beef for anyone who can see any diference between what Howard says and what Blair, Brown or Welsh Labour say.