We support positive discrimination here at British Nationalists in Wales Watch. But it's still great fun watching British Nationalist Labourites, old and new, ripping each other to shreds over the issue of all-woman shortlists! :-) 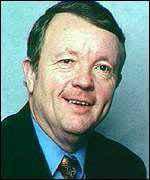 Rebel MP Peter Law last night accused Labour of further hypocrisy as it emerged that Robin Cook's successor will not be chosen from an all-woman shortlist.

Party members at Livingston in Scotland will be able to choose a man or woman as their candidate for a by-election that will take place this autumn.

Mr Law won Blaenau Gwent as an Independent at the General Election after being barred on gender grounds from applying for the vacancy. His departure from Labour cost Rhodri Morgan his majority at the National Assembly, where Mr Law represents the same constituency.

Yesterday, it emerged that five men are likely to enter the race to succeed Mr Cook as MP for Livingston. Mr Law said,

"There seems to be no rhyme or reason in the way Labour behaves... They are completely inconsistent. This is another example of grotesque double standards."