A superb letter appeared in the South Wales Evening Post today by Dr Dai Lloyd AM. 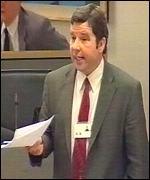 Recent correspondence in the Evening Post falsely claims that the majority of people in Wales want to see the Assembly scrapped. This could not be further from the truth. This anti-devolution propaganda by these British nationalists is not founded on fact but merely on personal opinion and bias.

If this dying breed of sceptics were to do some research they would actually find that, rather than scrap the Assembly, the people of Wales want to see it get enhanced powers.

A recent ICM 2005 opinion poll shows support for a law-making parliament in Cardiff Bay is now running at 64 per cent of the population. The number of people actually wanting to see less powers coming to Wales is reducing.

Dr Dai Lloyd AM
Plaid Cymru, The Party of Wales

We are glad to hear that the number of British Nationalists in Wales is reducing. Hopefully they will become extinct in the not too distant future!