Cymdeithas yr Iaith Gymraeg, the Welsh Language Society, has campaigned for a New Welsh Language Act, with extending the provisions of the 1993 Welsh language Act into the private sector as one of the main aims, for many years.

Recently, a prominent member of the Welsh Language Board, Collin Williams, gave his endorsement of this aim, and Labour Lord Prys-Davies also recently argued in favour of a new Welsh language Act. 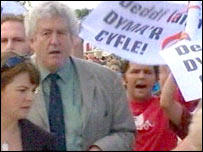 But the Labour Brit Nat with the power, Rhodri Morgan, remains sceptical. He was followed around, with placards and a loudhailer, at the National Eisteddfod Maes earlier this month by Welsh language campaigners, before admitting that the whole issue in his eyes was "boring, boring, boring!"

Back in 1993 Rhodri Morgan supported calls for a stronger Welsh language Act. These were his words:

"The Government calls this a Welsh Language Bill, but it would be better described as a Welsh Language Quango Bill. What one could call a Quango for the lingo ...... We shall be abstaining tonight because we hope to have the opportunity before long to do the job properly. That will be done when we revisit the question of a Welsh language messure when we are in Government 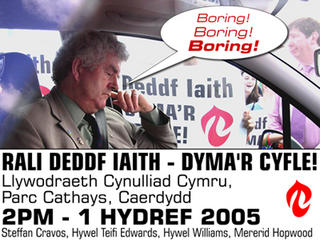 But Once in power, Rhodri Morgan changed his mind and has opposed the strengthening of Welsh language legistlation.

You can also support their call by attending a Rally arranged by the Welsh Language Society, outside the Welsh Assembly Government HQ (Old Welsh Office), Cathays Park, Cardiff at 2pm on Saturday October 1st 2005.