Two weeks before the World Cup kicked off, gaffe-prone First Minister Rhodri Morgan told Wales on Sunday he would be following INGERLAND - until their supporters started acting "stupid". Then, he said, he would cheer on anyone playing England. He said:

"When England fans do something stupid I switch my support to other teams... Or just whoever England are playing against when their fans start acting stupid.

At the time, we said that the truth is that Morgan, who always comes over as a proud Welshman in the English press but is in fact a British Nationalist, will support England because England is the 'motherland' for Labour Brit Nats in Wales. He also supports England because he doesn't want to offend the English vote in Wales. 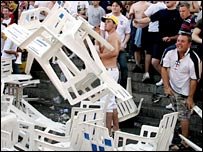 We also said that you either support a country or you don't. It's not the fault of the football team, or nation, if a bunch of idiots riot... and that's exactly what happened last night. Erwin Hetger, head of Stuttgart police told BBC News:

"We had no problems at all with the French, Swiss and Dutch fans that were having a great party here. It all changed when the English fans arrived. The atmosphere changed."

It looks as if Rhodri will be cheering for an Ecuador victory today then!