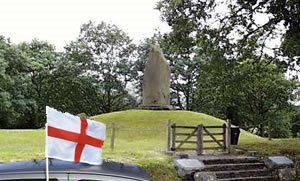 The Labour MPs are all for flying English flags in Wales, of course. English votes are more important, and England is a real country. Funny how English flags is a problem for Labour in England but not in Wales.

We can cope with English tourists flying the flag, but when people living in our country fly the flag in a blatant show that they will not integrate into Welsh life, and if they do it's on their terms linguistically and culturally (like Labour MP Mark Tami), it gets too much!

With all these English flags in Wales it's like King Edward's army is back to show us who's boss. It's a sign of our colonisation by a more powerful neighbour - swords in 1282 and 1400s, British capitalism and consumer culture backed by Labour loathing of Welshness today.

For our readers who understand Welsh, here’s a wonderful poem on the subject by Llion Jones from Yr Annedd:

Here’s a dodgy translation by yours truly!

The arrogance of empire is in the air
and the sharpness of old interference
driving through conquered Wales
waving its dominance.

He speaks sense? He's warning English people that the mere sight of their flag is enough to whip up such a frenzy in Wales that they will resort to violence and racism. You must be so proud.

wonkotsane it seem to be you who can just keep his racism and violence under control!

The odd individual who burns an English flag is nothing compared to regimes and majority groups who burn flags, suppress languages and overly centralise a state to the benefit of the majority ethnic group. How do you think it felt when the government through typical anglocentric ignorance inadvertently banned the Cornish flag?

Wake up to your responsibility for Greater England also known as the UK, you righteous indignation is false and will not wash!