Another small nation takes a step towards independence

Another referendum and another small nation takes a step towards self-respect and self-government. Last time Montenegro - this time a country 12 times its size - Catalonia.

An overwhelming majority voted for the New Statute that gives the Catalans more power over their own affairs and more power to normalise their language.

The new statute recognises Catalonia as a nation and will strengthen the Catalan language - a language, like Welsh, which was banned in its own country.

Many see the new statue as the last step before full independence. However, there is a snag in calling a referendum on Catalan independence - it's 'illegal' i.e. unconstitutional under the Spanish Constitution. 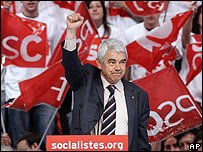 So there we go, the democratic will of nations - and people - had more right under the constitution of Serbia and Montenegro than in Spain! What moral right does the Castilian population of Spain have to deny and put a boundary on the legal right (by the United Nations charter - of which Spain is also a member) to self-determination? It seems democracy has its limits in Western Europe.

What's it got to do with the Spanish? Independence for Catalonia would still mean Spain would have its own government, embassies, football team and language.

Catalonia is part of Spain. The BBC isn't implying that the opinion of non-Catalan should be a barrier is it? The fact that only 50% of Spaniards support more power for Catalans is relevent to the story the same as it would be if the BBC were running a report on Welsh devolution and said that x% of English people favoured more pwoer to Wales.