Aberystwyth is NOT in England!

It seems that the good people of Aberystwyth in west Wales have not been best pleased by English chain stores displaying the St. George's Cross, and items plastered with ENGLAND, in their branches in the town (which is in Wales by the Way!)

The biggest culprits have been Giles Sports and Bewise. The stores have recently been re-decorated with the words "Be Wise, Don't shop here!" and "Aber(ystwyth) is not in England!" 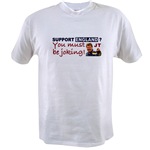 The story comes from the famous Welsh language 'Dogfael' blog.

We have also received an email advertising a T-shirt printed with one of John Toshack's famous quotes.

"Support England? You must be joking!"

We've always known that Labour Ynys Môn MP, Albert Owen, is a British Nationalist, but by signing this early day motion, we are a little confused?

The motion calls on all constituent parts of the United Kingdom to get behind England during the World Cup. Does he therefore believe that the UK, Britain and England are one of the same? Or is he now an English nationalist as well?

It has nothing at all to do with jealousy. We are completely happy to see English companies support their country IN their country.

The problem is that these English companies treat Wales just as a part of England.

They do not respect our language - no Welsh language signage in most stores.

They do not respect our national teams, identity and country - why display England flags, and sell England produce in Wales? Why not Welsh produce? We may not have qualified for the World Cup, but our rugby players are touring in Argentina.

The British (i.e. English) Press are just as bad. Front page of the Sun, Mirror etc all concentrating on England, Rooney's stupid foot etc. Who cares! I would much rather know about how the Welsh rugby team are doing in Argentina, and how bad is Duncan Jones' injury?

THIS IS THE PROBLEM! Unlike in Scotland, English companies and the press treat Wales as just the Western side of England, not as a country in our own right. They show us no respect!

Regarding England fans waving the flags on their cars etc, I have no problem with tourists doing this, they are English and rightly proud ofthe fact.

But when these flags start popping up on the houses in our small villages and towns, where English incomers have come to live but have made no effort to intergrate, learn our language, respect our culture etc it drives us mad!

Imagine a small village in rural England, with all of the houses being bought up by Germans, and German flags hanging out of the windows, wouldn't you be annoyed?

If England hadn't qualified, would you have supported Germany? We're all Europeans after all, what's the problem?

But in Wales the problem is MUCH worse. It has nothing to do with racism. Quite the opposite, it is to do with a small country trying to survive nexdoor to one of the most powerful countries in the world.

25% of people living in Wales were born in England. 1 in every 4. Imagine immigration on that scale coming to England. There would be an outcry.

Immigrations is a very good thing, but only at a reasonable level, and only if the immigrants (i.e. English) respect their new adopted country, its traditions, culture and language!

Now do you understand why we get a little annoyed?

When you talk about 'our' language you seemed to be forgetting this fact.

If one tradtion you'd like people to adopt is the habit of vandalising shops I don't think you'll get very far. You have a number of other options including not buying anything from them.

If you wish to limit 'immigration' you don't need to do it with legislation. Just persuade other xenophobes to stop selling thier houses to people who have more money.

Ah but you wouldn't get any takers for that either, would you now?

Only one World Cup? The Germans have won three.

I can understand you not wanting to support England ythats fine. But trying to tell businesses what they are and are not allowed to sell is completely over the top. Boycott them by all means, but they have the right to sell what they choose to.

I can understand that Welsh people would not like to see the England flag on display in many parts of Wales, but Aber is hardly your average Welsh town, but a university town dominated by English people. However, speaking of averages and the Welsh language, only perhaps 20% of people in Wales are Welsh language speakers, which Nicholas Michael Morgan, renders your point about Welsh signs in shops a touch redundant. As for your statistics Nicholas, consider how many people there are in England with names like Jones, Rees, Davies, Harries, etc, in England. This is evidence that the populations of both England and Wales have amalgamated and assimilated with each other - on both sides of the border - for centuries.

The simple fact is that shops are private property and they can sell or display whatever they want, without having to suffer property damage. The people who did this are criminals and xenophobic criminals at that. I know several people of their ilk, Welsh speakers who have nothing to do with their English speaking neighbours; individuals who actively attempt to make English students feel unwelcome in Aber.

For the record I am a student at Aber and my family originates from the valleys.

England fans would NOT support Wales if they qualified - that is a blatant lie wonkotsane. And so what if Welsh speakers can also speak English David, I'm assuming that Non-Welsh speakers CAN learn Welsh if they wish, they choose not to do so. So if I choose not to speak English when these non-Welsh speakers around - that's fair enough, surely? Courtesy works both ways. And plastering shops in Wales with English flags is looking for trouble - you wouldn't try it in the Republic of Ireland would you. An if there are Welsh speakers that make their English speaking neighbours feel unwelcome - it's probably no worse than the "welcome" that English people give to muslims that move in next door to them. Let's try seeing the wider picture shall we.