Europe of the Future - The Times gets it right

Congratulations to The Times - newspaper of the British establishment - on an excellent article on Friday 2nd of June. 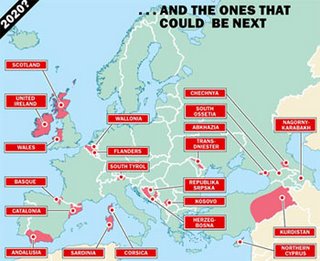 Jeremy Page and Richard Beeston seem to fully understand what is going on across Europe more than any other journalists.

Their outlined scenario (with helpful map!) gives a glimpse of a Europe of more nation states than today.

Many states are new – i.e. Wales, Flanders and the Basque Country- and many are ancient nations that regain their sovereignty – i.e. Scotland and Catalonia.

If you’re not China, India or the USA, what's the point of being a middle-sized European state in the 21st century?

What's the point of Britain, Belgium or Spain? What can these states do, that historic nations can't? (Except, possibly wage war... not the best advert).

Page and Beeston's article however did have one massive oversight. They didn't include one of Europe's oldest nation states, which has made a massive contribution to European literature and learning.

That country? Theirs - England. If Wales and Scotland become independent, then England will also regain hers!

The times they are a changing!

No doubt an independent Scotland and Wales would be done along the lines of the Irish Free State where their Lords still got to sit in the British House of Lords. Labour will have to keep Scots and Welsh MP's in the House of Commons otherwise they'd never pass any legislation or win an election.

The Basque Country a new country?

I guess you've never heard of Navarre before.

The fiercely independent Middle Age Kingdom of Navarre was the kingdom of the Basques.

So wether this "new" political entity will be called Euskal Herria (Basque Country) or Nafarroa (Navarre) it will be up to the Basques to decide.