An Answer to the West Lothian Question 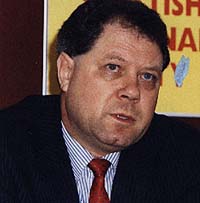 Former SNP's deputy leader - Jim Sillars - talks sense, and says it in an interesting way in a recent opinion column for the Edinburgh Evening News... Oh, for a high profile member of Plaid Cymru to be so confident and clear!

In case you don't read the Scottish press, enjoy this article by the Scot who doesn't make love to the Union Jack.

England has got no use for us any more
JIM SILLARS

ENGERLAND, Engerland - roar the Sassenach supporters in Germany. That noise will die if England get knocked out, but there is another cry being heard, of far greater importance: the call from influential voices down south saying ever more firmly, England for the English.

England for the English isn't simply a reaction to the probable premiership of Gordon Brown, the Scotsman whose supposed support for England during the World Cup fools no-one. No, the reason lies in the West Lothian question posed by my old friend Tam Dalyell.

Tam first asked it when devolution became a serious runner, away back in the 1970s. Forty years later, it still hangs around our politicians' necks, and remains a conundrum for constitutional gurus. Within a single United Kingdom there is, of course, no answer.

As reported in the Evening News on Monday, the House of Commons select committee on Scottish Affairs, with nine Scots out of a membership of 11, has puzzled whatever brains it can muster on the subject and has noted four possible solutions: (1) only English MPs allowed to vote on English matters; (2) English devolution; (3) fewer Scottish MPs; (4) the dissolution of the UK.

The first would require the House of Commons to bar Scottish MPs from attending and voting, which would turn it into an English Grand Committee. English votes on English laws? Seems an obvious and fair solution to Tam's question. But it is nonsense on stilts.

Take a likely future scenario of the Tories not only getting a majority of votes in England, as they did last year, but a majority of seats too; but Labour having an overall Commons majority through their Scottish MPs topping up the number gained in England. We would have a UK Labour government, but the Tories in the majority in England Grand Committee.

Most matters now dealt with at Westminster, post-Scottish devolution, are on English issues, such as education, the NHS, criminal justice, police, transport, local government, council tax, social work etc. The Labour government would find itself defeated every time on its English domestic legislation if only English MPs could vote. It would be a government stripped of power over almost 50 million of its citizens. So, that is no solution at all.

But what if the second idea - let the English have their own way in England by creating assemblies all over that country? Problem is that the English don't want that. John Prescott tried it and was humiliated in a referendum up in the North East, where there has been much anger over Scotland getting so much say out of devolution. If it isn't acceptable there, it has no chance anywhere in England.

There is good reason from an English point of view in rejecting internal assemblies. For centuries centralised government from London has brought England success at home and abroad. Their whole political culture has been developed to centre on London and Westminster. It is from there that they still seek solutions to their problems, not from devolved assemblies with artificial boundary lines breaking up their country.

The English lost no political power in the Union of 1707. We did. We have a clear border upon which to define the writ of devolution. They have no clear boundaries between their regions. So, English devolution is no solution either.

The third notion of fewer Scottish MPs could actually make matters worse. Let's say the number is reduced from its present 59, down to 20. If Labour had a tiny overall majority, dependent entirely on those 20, then the sense of unfairness, and justified outrage, down in England would grow. So, that solution is out too.

The fourth idea, the dissolution of the United Kingdom, is for me, a former SNP MP, a welcome one. But my view is not important. It's how the English view is developing that really matters. The English are not like the supine Scots who put up with an alien English-based government they detested in the form of Margaret Thatcher. The English are of a different stamp. Where we are timid, they are assertive. Where we believe in the myth of our own inadequacy (too wee to survive, too poor, not good enough to run ourselves) they are not known for such modesty. While Scots sing Flower of Scotland, with its pessimistic wail of when will we see their likes again, the English belt out Jerusalem with pride about England's green and pleasant land.

Where we long ago forgot the art of statecraft, and didn't even know we had explicit Scottish state interests, the English practised statecraft and realpolitik with zest when they flushed Scotland's oil into their southern flesh pots.

There are no ifs, no doubts in the English mind about English rights; and if those can only be protected by English independence, that is what will happen. As Michael Portillo put it last Sunday when advocating that England evict Scotland from the UK:

"The loss of one-twelfth of our population in a region that drags down our national performance could not harm us. Our hydrocarbons are less of an issue now they are being exhausted."

England held fast to Scotland for what we had: strategic military bases during the Cold War, and vast wealth from oil.

No Cold War, oil running out, goodbye to the Jocks: that's the English answer to the West Lothian question.

It’s a great article and I support the Scots, Welsh and English in their desire for independence or greater autonomy, but for Jim Sillars to say:

"But what if the second idea - let the English have their own way in England by creating assemblies all over that country? Problem is that the English don't want that. John Prescott tried it and was humiliated in a referendum up in the North East, where there has been much anger over Scotland getting so much say out of devolution. If it isn't acceptable there, it has no chance anywhere in England."

Sorry Jim but you are clearly trying to ignore the Cornish and there various demands for an assembly. Ok i here some of you say "Cornwall is not in England", yes very true but I don't think Mr Sillars had this in mind.

Rather I see it as another attempt by Scottish Nationalists to sacrifice the Cornish to please the new God 'English Nationalism'.

Jim, either research you subject properly before you speak for others, or, in the cast that you knew already, stop lying! It’s undemocratic, underhanded and you should know better!