In a Field of His Own

I lamented in a previous blog the slow death of the Brit Left who seem to have been reduced to going on about Iraq, Palestine and maybe Bolivia or Venezuela but are in self-denial about the future of the UK apart from pushing New British Nationalism on us - yes, Brown was at it again over the weekend. 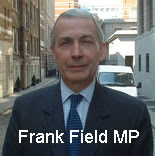 However, the left are not all moribund in their British nationalism. I've already spoken about Straw being an intelligent option for Labour rather than Brown and Billy Bragg tries to create a new Englishness which isn't racist ... of course, Englishness isn't racist, it was only the Brit Nat Left who said it was in the fist place.

But the one politician on the Left who is brave and intelligent enough to actually think the unthinkable (again) is Frank Field. I believe Field was born in Wales so that may give him some idea of the nature of nationality and identity. In an intelligent and interesting interview on GMTV's Sunday program who reveals the (British) Emperor’s new clothes. This is a snippet from the interview:

"... I mean, I love England but somehow to think that we've got special status in the world because we're the United Kingdom I just think is tragic to still be peddling that view."

He also understands that Britain is just Belgium on stilts. China, the US and India won't give a damn what she thinks in a few years time - stop deluding yourself - just take a look at the demographics.

Here's the interview (thanks to Iain Dale's blog)