Brown's ballsed it up!

So Brown, in a bid to save his massive ego (sorry the Union) has launched a Kulturkampf. 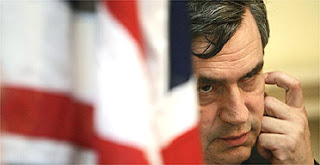 What's that? You thought only bourgeois middle-class Welsh-speakers believed in cultural nationalism?

Oh, I see, hypocrisy! What's that again, Brown? The Tories are being 'opportunist' by talking of English Votes for English Laws? Of course, that's so much different from the 'opportunism' of Labour campaigning for a Scottish Parliament in 1997... nothing to do with concern that the SNP would wipe up the Labour vote were Labour not to offer a parliament.

And hey, the really bad news to Brown and other Brit nationalists, is that some of the Tories and English actually believe in an English parliament... and even independence for England.

Brown's ballsed it up. This is too good to be true. The British nationalists in the Labour party have realised that they just can't put the elephant back in the bottle! They're resorting to flag-waving and name-calling.