Just a thought, how do the ambassadors of those Balkan (i.e. deranged, blood-thirsty) states feel when the British nationalists of Nu Labour talk about the Balkanization of Britain? 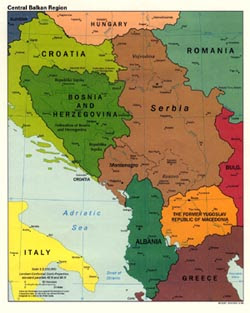 Do they mind that their region is used as a by-word for hatred and stupidity? I mean, the connotation hardly helps them in their efforts to boost the image and economy of the region. If Hain started talking of the 'Africanization of Britain' - his friends in the CRE would string him up!

Yes, the Balkans have witnessed some pretty nasty wars over identity and land... so much unlike Britain who of course sent Welsh men to fight and die when it felt its identity and land was under threat in World War One and Two, the Falkland War, Rourke's Drift, Khartoum, American War of Independence, Irish War of Independence, Napoleonic Wars, the War of Jenkins' Ear, the ethnic cleansing of Aborigines in Australia and Africa, Suez, Korea, Iraq etc etc.

You see, the Balkans are so much less sophisticated than us in Western Europe like Germany and France... just don't tell that to the Jews and Algerians.

And what's wrong with states breaking into smaller states - Czechoslovakia - one state in 1992, two in 1993 - two states for the price of one!

I think I'll write a letter to these Ambassadors of these Balkan states asking why they allow the British nationalists to racially insult their region and damage their economic prospects... assuming of course they can read.

Too right. And who exactly are supposed to be playing the part of big nasty Serbia who tried to hold on to the smaller states aginst their wishes at all costs?

It has been centuries since there has been a military conflict on Welsh soil, and that was when we got dragged into the English Civil War.