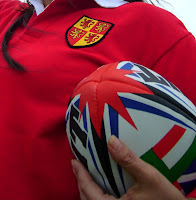 For some reason the WRU like the servile Three Feathers with the equally colonial 'ich dein' motto. During the forthcoming Rugby World Cup shouldn't our national rugby team be wearing a motif which is Welsh and proud to be Welsh not some Brit Welsh, can I have an OBE please badge?

...and that emblem is a hangover from roman times (dragon). You'll have to come up with something else... Rhodri and Ieuan holding hands while riding the dragon!

Remember the Flag Flying campaign and sign the petition - http://petitions.pm.gov.uk/nationalflags/, write to samantha.turner@culture.gsi.gov.uk and go to www.peterdcox.me.uk/. Look up Bryn Glas in Wikipedia and read about the Welsh victory. Give your help to Plaid in the coming General Election (I'm not joking!). Feel good that you are working for Wales.

If anyone is a registered user of wikipedia here, can I ask them to object to the proposals at -
http://en.wikipedia.org/wiki/Wikipedia_talk:Manual_of_Style_%28United_Kingdom-related_articles%29

The proposal is to make all the people who are listed as English, Scottish, Welsh etc into "British" by default

If you aren't registered, please do, but make sure you know how to edit the thing properly!

Here is the Nationality proposal -

QUOTE
* Where it is required to state the nationality of a person from the United Kingdom, for example in an infobox, British should be used.

* Where it is required to display a flag representing the nationality of a person from the United Kingdom, the Union Flag should be used.

The Welsh should also mount a campaign to get the WRU to disaffiliate from the British Lions. Not only is the team a blatant bit of political propaganda, but the lion logo just happens to be the English one...

Absolutely! The symbol of Charlie the Greek has nothing to do with Cymru!

Of course the wales team needs an original emblem, the true one, you know, a team (specially a national one), needs some encourage and special motivation for winning, and the emblem is the most important thing on the uniform, like a cheap viagra for an old man!!!!

This blog is very interesting, i liked because show many good new ideas. I must to say it catched my attention. I like to know about everything and i am fan of the watches. I prefer to see several style before to buy one.
_______________
buy viagra