Kim Howells is alive and well ... I'd thought he'd brought a holiday home on the Croatian coast - he's so fond of the Balkans see, and as an ex-communist it would be just his place. And it also has a city called Split - which is what's obviously happening within the Labour party in Wales. Which reminds me, what did our left-wing friends in Plaid say about a Rainbow coalition being unstable? 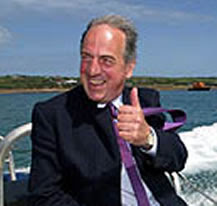 In any case, Kim has come back from the dead or what ever job he's got in Westminster to give his views on the impending Lab-PC Government. As usual for Labour MPs, he implies the AMs are a bit twp - that is the Labour AMs, his own party's members, are pretty thick. Many would agree with him on that. As a Labour member he could of course not vote for such useless AMs too.

But his 'leaked' letter which appeared in the Western Mail was like being transported back to 1985 all over again. He Trots out (sorry, couldn't avoid the pun) some scary stories about Plaid and independence and seems to have forgotten that Labour only got 32% of the vote and so aren't the majority party in Wales - nor are Plaid. It's called compromise Kim, you know, you've done a lot of it as you've climbed the political career.
So it got me thinking and I had another look at the Lab-PC, One Wales Document, which is causing concern for Kim and his backing singers - the 4 Labour AMs (they'd be 4 of the rather twp Labour AMs which the Labour MPs don't think are good enough to run a country).
The document includes some cliched stuff about equality and redistribution which I would have thought old Kim would have liked, until I remembered that the best capitalists are always ex-Marxists. Then there was some really Balkanisation and ethnically tainted ideas like ... erm, sort out Welsh medium education, sort our Welsh medium education in the universities and even a Welsh Language Act of some sort and then, yes, campaign for more power to the Assembly.
Hm, terrible stuff. I mean, if the Albanians of Macedonia, probably one of the poorest communities in Europe, can have a university in their own language, it would be awful was the University of Wales to offer half that to Welsh-speakers. And isn't it awful that the Labour party in Wales should shoulder some responsibility for making Wales a truly bilingual country when the Labour Party in Westminster makes sure that the UK becomes a truly monolingual state?

And what's this about more power to the Assembly? For heaven's sake, the Taffs will want the same power as the Northern Irish or Guernsey next, or even, heaven forbid, one of those silly little Balkan countries like Slovenia. After all, we know that Westminster knows best and Westminster is for big boys.

Cardiff and Wales are for the little people, not grown-ups. It's time the Wales knew its place eh - voting fodder for the Labour party in Westminster. And the only nation worth fighting for is Britain and the only language which should have rights is English. Sounds like Kim's a British Nationalist to me.

Every nation has its cross to bear. The Welsh have Kim Howells and the English had Kim Phillby.