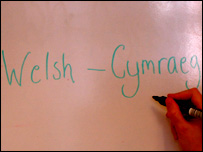 Had there been a poll in 1536 when Wales was overwhelmingly Welsh-speaking then I'm sure there'd have been no call for an English Language Act - i.e. the act of incorporation when Wales became an integral part of the Realm of England and made Welsh an alien language in its own country:

"The people of the same dominion have and do daily use a speech nothing like ne (nor) consonaunt to the naturall mother tonge used within this Realme", and therefore there was a need to "utterly to etirpe alle and singular the sinister usages and customs differing from the same... to an amiable concord and unity", therefore "From henceforth no person or persons that use the Welsh speech or language shall have or enjoy any manor office or fees.... unless he or they use and excercis the speech or language of English"

Every act since then has been an English Language Act confirming English as the 'normal' language of Wales, creating an inferiority complex among Welsh speakers which lead many not to bother passing Welsh on to their children - why bother English was the official language?

The New Welsh Language Act is just a little small step to rectifying the colonial decision of the 1536 Act, which made our language a minority language in its own country. The English (rightly) would never allow a situation where only 20% of the English population spoke English. Were English a minority language in England would you be surprised if the majority German/French/Welsh speaking population didn't see the need for an English language act?

The question for the New Welsh Language Act is this - is it an act to try to promote the use and number of Welsh-speakers or is it an act to try and give those already Welsh-speaking rights as a community? Both concepts overlap, but there's also an important distinction. The Act needs to be clear but also subtle if it is to promote the use of Welsh.

Cymdeithas yr Iaith has rejected the findings of a BBC Opinion Poll, which purports to show a majority opposed to a Language Act that would require private corporations to make full use of Welsh. Cymdeithas claim that opposition from 63% of those questioned was due to the choice of the emotive word "force" by the BBC. Using such a prejudicial term the BBC is doing the CBI's work of rejecting the idea of giving people in Wales linguistic rights for them.

"We are at a loss to understand why the BBC wishes to compromise it's impartiality and try to do the CBI's lobbying for them by using such a prejudicial form of wording. We would also question if the survey was conducted in English only - which would again prejudice the results in a bilingual community. The real significance of this survey is that feelings are so strong on this issue that a third of those questioned still responded positively despite the negative wording, and a quarter wanted to go much further than Cymdeithas by placing immediate requirements on every single business in Wales. In this context, our call for a plan of incremental action to ensure bilingual services in the private sector is modest indeed."

Aled Edwards of the CRE stated on BBC Radio Wales that in his view the BBC’s decision to use the term "force" shows that the aim of the poll was to ‘create’ a story, instead of collecting the views of the Welsh people fairly.

Ah, the manipulation of language... Could it be that the people conducting the poll didn't realise the impact the word "force" has? Non-Welsh speakers might take it to imply that they'd have to learn the language, etc, etc. This is definitely a BBC generated story. I was suprised when I read it earlier today on teletext -- it's not as if there is a new act imminent.

At the last Cymdeithas rally I attended in Cardiff, the only poltical parties visible were Plaid and RESPECT. Here is the English translation of the bilingual leaflet that RESPECT were handing out:

"The Government calls this a Welsh Language Bill, but it would be better described as a Welsh Language Quango Bill. What one could call a Quango for the lingo ...... We shall be abstaining tonight because we hope to have the opportunity before long to do the job properly. That will be done when we revisit the question of a Welsh language messure when we are in Government."

So Said Rhodri Morgan back in 1993 when he opposed the Tories Welsh Language Act. But as with many of the promises New Labour made prior to getting elected in 1997, this promise has vanished into thin air. We in RESPECT are for the Welsh language having full equality with English. This would mean going way beyond the present legislation. The current Act calls for bilingualism based on ‘reasonableness’ . This has been used to avoid immediate use of Welsh in some official contexts.

We stand for the defence of the Welsh language, not out of nationalism but out of respect for international culture. International culture to us does not mean the ’culture’ of Murdoch, Mcdonalds and Market Values, but of those who believe another world not only possible; but necessary. We believe our children should have access to the Mabinogion, Shakespeare, Salman Rushdie, Caradoc Evans, Dylan Thomas, Bapsi Sidhwa, Chinua Achebe and many others - and in whatever language they want! Such a stance also includes fighting for the rights of those who speak other languages such as refugees and asylum seekers and their children so that they have access to education and other facilities in their own languages.

We believe the money is there to provide this, but the government wastes billions on a war opposed by millions. Our movements, whether they be for language rights, or against war and injustice have begun to provide the basis for a real alternative to New Labour. But our views are far too often marginalized and disregarded by the mainstream political parties. RESPECT is a party that seeks to provide a voice for the millions who are opposed to war, racism, privatisation inequality and the destruction of the environment. We hope to create a broad party that brings together all progressive movements into a united challenge to New Labour."

This blog is very interesting, i liked because show many good new ideas. I must to say it catched my attention. I like to know about everything and i am fan all information. i am a good reader, that´s why i prefer to read this type of blogs, very interesting.
_______________
buy viagra