Another month, another gimmick. The latest gimmick out of the Sugarpuffs pack dressed up in the usual class jingoisms is Alun Pugh's announcement that admission to some of Wales' most famous castles will be free on St David's Day. 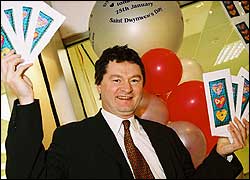 Whoopee. Do they think we're kids - what next, a free lollypop in February's gimmick of the month?

Free entrance on St David's Day to the colonial castles of our conquerors? Great - gimmicky and insensitive too!

And cynical. Of course, we'll all be working on St David's Day because the Brit Nat Labour Government don't want to make it a bank holiday and our useless Assembly doesn't have the power to do so. All the kids will be at school as well - unless Labour suggest they mitch off?

Of course Labour could make St David's Day a bank holiday but they don't want that - they want us to celebrate a British nationalist bank holiday instead.

But, if you are taking a day off to celebrate St David's Day then why not attend the annual St David's Day parade in the capital. There'll be hundreds there including all three opposition parties. But you can count on one thing. In keeping with the previous two events there won't be a single Assembly Member from the British nationalist Labour party. They get a bit itchy if things are 'too Welsh'. Maybe if we flew the union jack they'd feel more at home!