So, as if we needed confirmation, and to all those Labour people (and even Plaid Cymru supporters) who think that this blog has been wrong to call Labour a British nationalist party, Brown comes out of the closet as a Brit Nat. 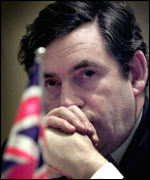 Flying the flag from gardens? Well it's a change from garden gnomes at least. A 'British Day' to celebrate Britain's tradition of fairness and inclusivity... like Bloody Sunday or Amritsar? The British state is the reason why Welsh was at death's door, why should any Welshman support a British Day?

Brown - you're a generation too late. The Welsh and Scots aren't peasants any more (except those fawning Brit nat Labour MPs and AMs, like Leighton Andrews who also spoke at the Fabian Society's conference on Britishness in London on the 14th January). We won't accept it. There's more chance of burning flags than waving flags. Even the English have given up on Britain.

So Brown wants to be PM of the UK; and as a Scottish MP, or more importantly an MP representing a Scottish constituency, he has to have something to cover his tracks!

Yes, at last, the truth is out. Maybe the next time Betty Williams MP taunts Welsh nationalist with the 'you can't eat a flag' line, we can send her a knife and fork to go with her Union Jack.

Hullo! Have you seen the blog my profile is attached to?

I also support a parliament for England.