Who'd have thought that the one-time Conservative Education Minister could do more to promote Welsh democracy and identity than the Richard Commission and the whole Brit Nat Welsh Labour Party? 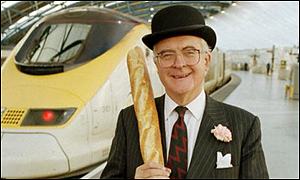 Baker - quite rightly - points out the growing anomaly of the West Lothian Question. The British Nationalist Labour Party try to dismiss the whole thing, but it's not that easy.

There's a genuine question of representation and legitimacy which Labour will try to ignore for very good moral reasons, erm... that Labour isn't the majority party in England and without Welsh and Scottish MPs they wouldn't win the next election!

So, the slogan from Brown and Morgan is: 'Save Labour - Save Britain' or rather, 'Save Britain to Save Labour'. British nationalism = Labour.

Labour's attitude towards English identity is, frankly, shameful; in their eyes it's either 'racists' or by definition (their definition) 'twee'. Labour's continuous insistence that identity 'multi-layered' and 'complex' is both an exercise in stating the bleeding obvious and in suggesting that any other identity (see English, Welsh or Scottish) is by definition narrow-minded, racists or intellectually lacking.

It's no wonder that English people are increasingly calling for an English Parliament - something we strongly support!

How ironic that the latest Labour Brit Nat fudge, the Government of Wales Bill, is going through the Commons at the very time when an increasing number of English MPs would seem happy for Wales to have more power if only England would too.

You should join the witanagemot club.