Labour aren't all British nationalists after all (well, not the English ones in anycase!) 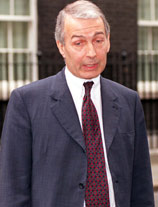 Distinguished MP Frank Field has broken ranks and brought a bit of common sense to the whole mess which is Welsh Labour's British nationalist handling of more power for our useless Welsh Assembly i.e. 'The Government of Wales Bill'.

Yes, whilst most Welsh Labour MPs will be spluttering into their pints as they see their days at the UK's best club numberd, the Government of Wales Bill has prompted English Labour MP - Frank Field - to introduce the following amendment:

The amendment, that would trigger either a referendum or a Commons vote on holding "English-only" votes in future, was drafted by the non-partisan Campaign for an English Parliament (CEP).

We support Frank Field MP and the CEP in their campaign.