The tensions within the various strands of British nationalism within Welsh Labour are well-known. The papers just released from Harold Wilson's weak government of the mid 1970s throw some more interesting light on the Devolution saga. 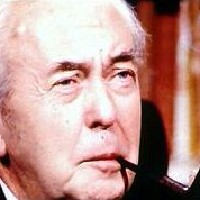 In fact it's surprising how little has changed since the thirty years ago in terms of the internal splits with Labour.

Fair-play to John Morris for sticking his neck out for Devolution in what must have been a pretty nasty atmosphere. The success of the Brit Nat anti-devo MPs led to 18 years of Tory rule.

But there we are - Brit Nats like Kinnock (and the Chris Bryant and *** of today) despite their boorish class jingoism, prefered to be governed by Margaret Thatcher rather than have a Welsh Assembly.

But then, Thatcher could do a lot of the nasty work which Wilson and Callaghan shied away from and Kinnock et all could blame her - tidy see!

Despite Labour bragging that our Assembly being the most open in Europe - after all, the new assembly buiding is made of glass, so it must be transparent! We'll have to wait until 2035 to see who stitched up who and how much Windbag Morgan caved in for us to end up with the dog's dinner which is 'Better Governance for Wales'