Who runs Wales - Clarke or Morgan?

Once again Brit Nat Rhodri 'windbag' Morgan is left speechless and looking useless as the big boys in London tell him what's what. Clarke has decided Wales needs one police force and, erm, that's it. 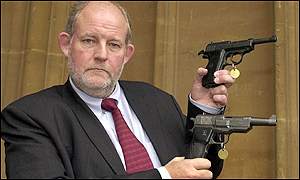 You can argue about the merits of one force, the status quo or a national Welsh police force decentralised to regions or even counties, but this should and could be decided in Wales. By Rhodri Morgan. The Prime Minister of Wales. Or is that asking too much?

Maybe Clarke, like Bryant, just doesn't trust his own Labour AMs in Cardiff not to cock it up for them?

Rhodri Morgan - a Prime Minister who can't even decide how many paperclips his own police service can order. Has the man no self respect?

This demonstrates how unacceptable the current constitution is. Who runs Wales?