Just happened to see an item on the news a few days ago about Carmarthenshire county council's decision to close some schools. In any case, I was struck how much more impressive the inside of Carmarthenshire's chamber was compared to our national Senedd. 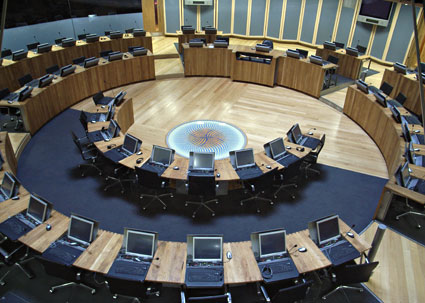 The inside of the Senedd looks like the house of MDF. What is that screen behind the Llywydd? What's that star-fish thing on the floor in the centre of the debating chamber - the centre-piece of our democracy? Is this the only chamber in the world which doesn't have the crest or flag of the people its meant to represent on display?

The Welsh Senedd could actually be any chamber in the world. There's nothing to say what or who it represents. And all that talk of the chamber being inclusive - you can't even see half the chamber if you're one of the lucky few to get into the gallery! At least those members of the public who go into the Carmarthenshire chamber can see the whole proceedings - and protest about them!

Senedd - an unlucky marriage of the anti-Welsh Brit Nat and the post-national Nationalists.

It's all very well going on about the environmentally sound part of the building, but did the designers and politicians praise the House of Commons's excellent sewage system when it was built in the 1860s and raise that as the main purpose of the building?