Mohammad Ashgar made history as he was elected on the South Wales East regional list. Mohammad is the first member of Wales' 'ethnic minority' communities to be elected to our National Assembly. 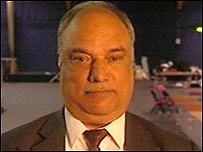 And guess what - he's a member of Plaid!

Bad day for British Nationalism - the extreme manifestation of it saw the BNP come within spitting distance (spitting being the operative word, one guesses) of winning a seat in the North.

Who are these people who vote BNP? The 'narrow minded' Welsh-speaker who want to live in a 'mythical medieval' community and attend the National Eisteddfod - 'the festival of hate' as it was called by the Brit Nat Labour supporting Welsh Mirror?

Well, sure as hell there are some racist Welsh-speakers but is that the core BNP vote? My guess; the party that flies the Union Jack so beloved by Brit Nat Gordon Brown, is more likely to be drawing votes from a core English community in the North.

People who may be part of the 'white flight' which Dafydd Iwan referred to some years ago, only to be accused of condoning it by Labour; people who may be as uncomfortable with the Welsh language as they are with Poles and Pakistanis.

Maybe, Mark Tammi and other Brit Nat MPs and AMs should look more closely at their own imagined community, political identity and philosophy before attacking Welsh nationalists - after all, the BNP have more in common with Labour than with Plaid.

As I said, a good day for Welsh nationalism - Mohammad Ashgar - HERO!

The SNP also got the first Asian MSP. It just goes to prove what a pack of lies the Brits put out about the two parties.