Less than a week after the election It's time to start thinking about 2011. 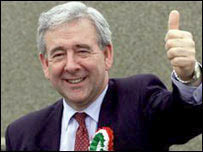 Plaid did very well with a good campaign and a clear message. This is because fundamentally, despite various differences, Plaid actually believes in something. Labour and the LibDems don't - and suffered.

But what would have happened had Wigley (or Adam Price) been leader. My guess is that Plaid could quite possibly have overtaken Labour as the largest party.

It's time for Plaid to put politics above personalities. Janet Ryder should do the honourable thing, and stand down from her north Wales seat and abdicate for Wigley.

Plaid got 292 more votes than the Tories in the north Wales region (50,558 compared to 50,266). If the Tories had managed to get 292 more votes, Plaid would not have won a single additional seat in the north Wales region, let alone 2! The fact that Plaid got such a strong vote in the north was in no small part down to Wigley. In truth - without Dafydd Wigley, Janet Ryder would be an ex-AM today. Plaid can't afford to leave such a popular politician at home gardening.

Janet's a good, solid AM but Wigley has star quality. If Plaid want to win in 2011 it needs a charismatic leader who'll be able to milk every single possible Plaid vote. It need someone who can appeal to floating Tory and Labour voters and can bring gravitas to the job.

Plaid needs someone who looks like a leader. It has two choices, Wigley and Adam Price. Plaid's job is to get both of them into the Assembly by 2011. But first of all, Janet Ryder needs to stand down.

There are two problems with the comments in this post. The first one relates to what Plaid is for. Is it to win the floating votes of unionists who want to give Blair/Brown and Cameron a kicking or is it to persuade the people of Wales of the merits of Nationalism?

Wigley may be the sort of charismatic man who can win votes but as he is also the architect of Plaids' policy of putting nationalism on the back burner for short term electoral gain is never, never Wigley really the sort of person one wants to champion the national cause?

The second point is more fundamental. If Plaid is to gain real electoral success under the current electoral system it must aim to win fewer list seats. List seats are a consolation prize for missing out in the constituencies. Plaid needs to aim for the big prize not the consolation in 2011

It seems Wigley will have to make way for Bourne and German - meaning your whole masthead may need a re design. The horrible Brit Nats are getting in to bed with your own Nats.